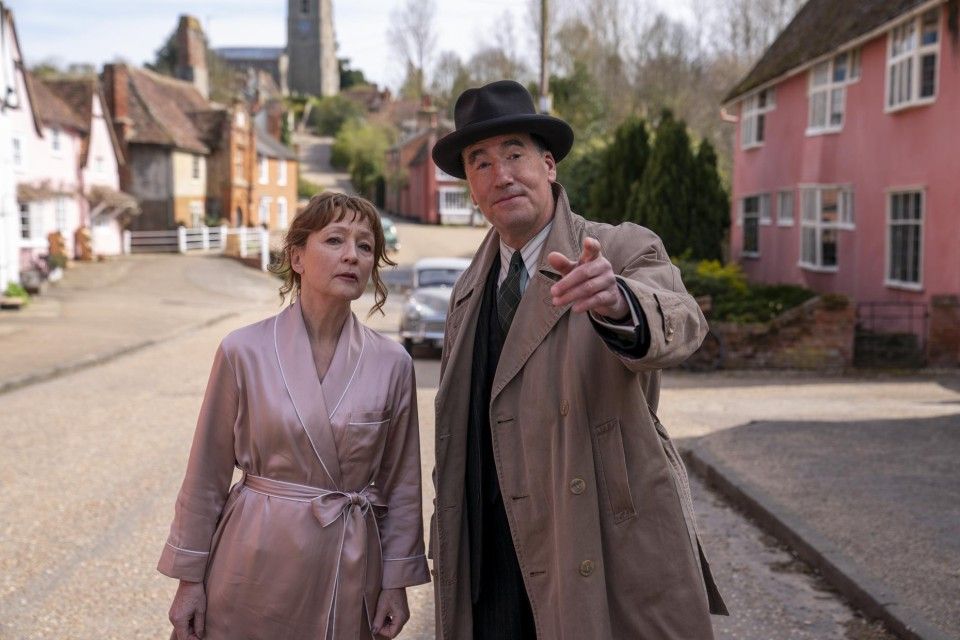 MAGPIE MURDERS, the six-episode mystery series based on Anthony Horowitz’s best-selling 2016 novel, makes its U.S. debut on Sunday, October 16, on PBS MASTERPIECE. (The series premiered earlier this year in the U.K. on Britbox.)

In MAGPIE MURDERS, two worlds are intertwined. In the real present, London book editor Susan Ryeland (Lesley Manville, Oscar-nominated for her performance in 2017’s PHANTOM THREAD) is trying to find the missing last chapter of the latest murder mystery by famous writer Alan Conway (Conleth Hill), who has died under suspicious circumstances. And in Conway’s book, MAGPIE MURDERS, we’re inside the novel with the character of world-renowned detective Atticus Pünd [Tim McMullan], who is trying to get to the bottom of several killings in a small English village in 1955.

In the TV adaptation, although not in the novel, Susan finds herself having conversations about the case with Atticus, even though he’s fictional.

Horowitz wrote the scripts for all six episodes himself, and is an executive producer on the series, as is Jill Green, through Eleventh Hour Films.

Green and Horowitz have also worked together numerous times previously, with Horowitz as creator/writer and both him and Green executive-producing. Their collaborations include the 2002-2015 award-winning original FOYLE’S WAR, and ALEX RIDER, based on Horowitz’s YA spy novels.

Both English, Green and Horowitz have been married to one another since 1988. PBS arranges a Zoom conversation with both as part of the Television Critics Association press tour