Originally published in The National

The much-loved fictional character is the star of ten young adult novels, which sold a reported 19 million copies worldwide, as well as inspiring the 2006 Hollywood blockbuster Stormbreaker.

In 2013 Rider bowed out with Russian Roulette, a prequel released with the blurb so many fans longed never to read: “the final book in the #1 bestselling Alex Rider series.”

But now Rider is to make a surprise return to the page, said Horowitz, who is midway through penning a new adventure which will take the teen hero to Afghanistan.

The 60-year-old OBE says it’s the first time he has written fresh material for the series in a decade.

“At moment I am writing Alex Rider, believe it or not, which is an extraordinary thing to be doing – to suddenly write an Alex Rider chapter,” says the writer, who was made an OBE in 2014.

“Alex will be going to Afghanistan – that’s a world exclusive.”

The new story is a mid-length novella to be released in a volume alongside other uncollected, previously published short stories.

“It’s not a novel, I’m writing a six-chapter novella, and I’m really enjoying it,” added Horowitz. “I can’t tell you how much fun I’m having, after what must be ten years since I wrote the last Alex Rider novel, to come back to this character after all this time and revisit him is really good fun.

“My publishers have wanted a collection of Alex Rider short stories for a long time,” added Horowitz. “There are half a dozen stories I’ve written over the years for newspapers and magazines, and they wanted to bring them together. It wasn’t going to be enough for a whole book, so I’m writing the other half as a sort of novella to give it the paper-length it needs – and I didn’t expect to enjoy it as much as I am, but it’s actually going very well.

“I have a passion – ten days ago this Alex Rider story didn’t exist.”

Fans will be pleased to hear the story will feature some thrilling set pieces of the kind the franchise is renowned for.

“There’s two actions sequences I’m going to write, and I’m just so excited that they’re there, in my head,” added Horowitz. “They’re slightly crazy, they haven’t been done before, but they just make me smile.”

Horowitz’s career reached a fresh high last year with the publication of a new James Bond novelTrigger Mortis, a well-received thriller which captured the spirit of Ian Fleming’s work, and capped a lifelong ambition for the writer, who’s creation Alex Rider he describes as a “tribute” to 007.

It came after Horowitz was commissioned twice by the Conan Doyle Estate to pen new Sherlock Holmes novels, with 2011’s The House of Silk followed by the sequel Moriarty in 2014.

So is a second Bond book on the cards?

“If I was asked, yes – probably,” he answers. “Look, you never know. People want me to do another Sherlock Holmes book, I have a TV series, so when I say ‘probably’, I mean I would love to do anther Bond novel, if they asked me to I would probably jump at it, but it’s just a question of circumstance and how much else I’m doing.

“Alex is going to occupy the next couple of months – I’m plenty busy.”

An established screenwriter, Horowitz is also known as writer and creator of British drama Foyle’s War, and producer behind founding episodes of Midsomer Murders.

Today he is also busy adapting former ITV series Collision for NBC in the US.

However he will not be moving to Hollywood anytime soon, confirming the script he wrote for upcoming Peter Jackson and Steven Spielberg sequel The Adventures of Tintin II has been scrapped.

“Tintin has vanished, I don’t know if it’s being made or not, but I would say 100 percent it is not being made with my involvement,” added Horowitz.

“I had a really good time, I loved meeting Steven Spielberg, two heroes of mine.

“I’ll be Hollywood next month scouting around for another feature film, but I’m less interested in film now than I used to be, mainly because, as many people would agree, the most interesting work is now being done in TV and not in the cinema.

“But that said, there is a certain glamour about working in world of film, and if something comes my way, I’ll certainly do it.” 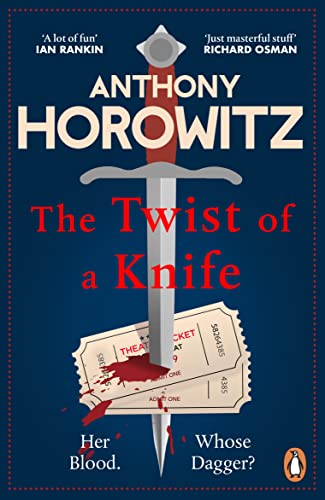